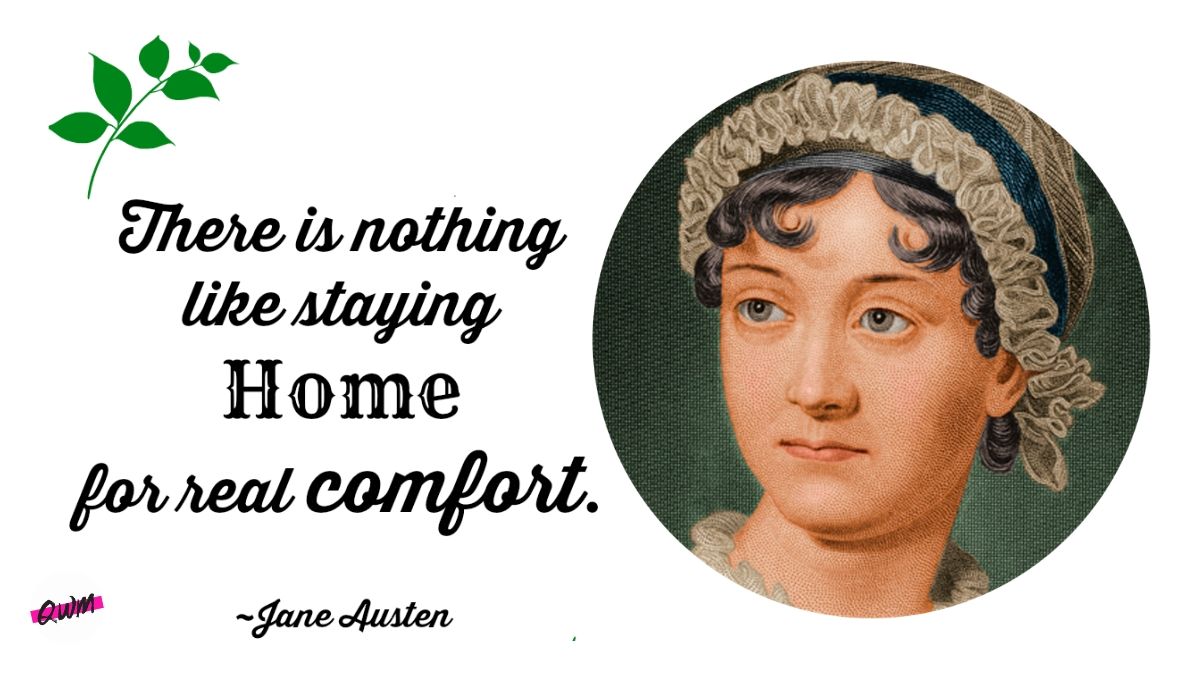 Look, as we eat food to live. Our mind eats words to live, and it must be served with soulful and true words in whichever syntactic form served. So for you all, here are the mesmerizing Jane Austen’s quotes. Live with her world! But before that, a little bit info about the writer.

Jane Austen was a prolific English novelist, born on 16 December 1775. She is known for exploring the themes of dependence of women on marriage, social standing with financial security. She is known for her writing charms that include irony, realism, social commentary and humor. You can find all these literary juices in her novels.

Her notable works include Sense and Sensibility, Mansfield Park, Emma, and Pride and Prejudice. With these, there are other works also that got published after her death, Persuasion and Northanger Abbey. On her some novels, movies also have been made that include Emma, Mansfield Park, Pride & Prejudice, Love & Friendship. This is a little bit information about Jane Austen. If you want to go in more details, you can consider a good book about her life. Here are all the top 50 Jane Austen quotes below.

“The more I know of the world, the more I am convinced that I shall never see a man whom I can really love. I require so much.

“When I fall in love, it will be forever.”

“There is nothing I would not do for those who are really my friends. I have no notion of loving people by halves, it is not my nature.”

“Money can only give happiness where there is nothing else to give it.”

“There is no charm equal to tenderness of heart.”

“To be fond of dancing was a certain step towards falling in love.”

“We are all fools in love.”

“There are as many forms of love as there are moments in time.”

“Friendship is certainly the finest balm for the pangs of disappointed love.”

“If I loved you less I might be able to talk about it more.”

“The Very first moment I beheld him, my heart was irrevocably gone.”

“Run mad as often as you choose, but do not faint!”

“Her heart did whisper that he had done it for her.”

“In vain have I struggled. It will not do. My feelings will not be repressed. You must allow me to tell you how ardently I admire and love you.”

“Then I examined my own heart. And there you were. Never, I fear, to be removed.”

“A person may be proud without being vain. Pride relates more to our opinion of ourselves, vanity to what we would have others think of us.”

“There is a stubbornness about me that never can bear to be frightened at the will of others. My courage always rises at every attempt to intimidate me.”

“Laugh as much as you choose, but you will not laugh me out of my opinion.”

“Give a girl an education and introduce her properly into the world, and ten to one she has the means of settling well, without further expense to anybody.”

“Seldom, very seldom, does complete truth belong to any human disclosure; seldom can it happen that something is not a little disguised, or a little mistaken.”

“What is right to be done, cannot be done too soon.”

“I do not want people to be very agreeable, as it saves me the trouble of liking them a great deal.”

“Where an opinion is general, it is usually correct.”

“Those who do not complain are never pitied.”

“There are people, who the more you do for them, the less they will do for themselves.”

“Nobody minds having what is too good for them.”

“You pierce my soul. I am half agony, half hope… I have loved none but you!”

“You must learn some of my philosophy. Think only of the past as its remembrance gives you pleasure.”

“Perhaps it is our imperfections that make us so perfect for one another.”

“You must be the best judge of your own happiness.”

“It is a truth universally acknowledged, that a single man in possession of a good fortune, must be in want of a wife.”

“Oh, Lizzy! do anything rather than marry without affection.”

“The most incomprehensible thing in the world to a man, is a woman who rejects his offer of marriage!”

“A woman is not to marry a man merely because she is asked, or because he is attached to her, and can write a tolerable letter.”

“Marriage is indeed a maneuvering business.”

“Happiness in marriage is entirely a matter of chance.”

“One man’s style must not be the rule of another’s.”

“Everybody likes to go their own way – to choose their own time and manner of devotion.”

“Full many a flower is born to blush unseen, and waste it’s fragrance on the desert air.”

“Nobody, who has not been in the interior of a family, can say what the difficulties of any individual of that family may be.”

“You expect me to account for opinions which you choose to call mine, but which I have never acknowledged.”

“How little of permanent happiness could belong to a couple who were only brought together because their passions were stronger than their virtue.”

“No young lady can be justified in falling in love before the gentleman’s love is declared.”

“To you I shall say, as I have often said before, do not be in a hurry, the right man will come at last.”

“The person, be it gentleman or lady, who has not pleasure in a good novel, must be intolerably stupid.”

“Oh! I am delighted with the book! I should like to spend my whole life in reading it.”

“A fondness for reading, which, properly directed, must be an education in itself.”

“But for my own part, if a book is well written, I always find it too short.”

“I declare after all there is no enjoyment like reading!”

So you see how empathic, lovable and inspiring Jane Austen quotes are. And we have selected for you Jane Austen Top 50 quotes, best by her that, when you read, you would find them all that they are saying some kinds of little short stories.

This is one of the best Jane Austen quotes collection that you can share wherever and with whomever you want to share. We are coming more with famous authors’ quotes that you would really find cherishing. Keep visiting QWM!

In this section we are going to tell you some interesting facts about Jane Austen. It will be really interesting for you to know all this. So hold your back and jump into the ocean of knowledge and never forget to share Top 50 Jane Austen quotes.

Jane Austen is the only British writer who got depicted on British currency in 2017.

Her mother belonged to a higher social class than Austen’s father, who gave the sense and understanding of social class of that British time that depicted in her novels.

Jane Austen and her sister got educated by their aunt Ann Cooper Cawley. Both sisters went to Abbey school. Besides, Austen’ s father taught her also.

Austen enhanced her comical abilities by writing for her family, especially for her brothers, to whom she was intensely close to. Her all family members were literary. It was only Austen that got published.

Austen’s father was a clergyman, who also ran a school for boys to support his family.

These are all, some of the best interesting facts about Jane Austen that would love to read and share. Her almost all novels revolve around true love, men, social class, women, marriage, how should be something and how shouldn’t be. It is interesting that she never married and curios often that why? Perhaps she was afraid of pain that in love comes. No offence here. Don’t mind it!