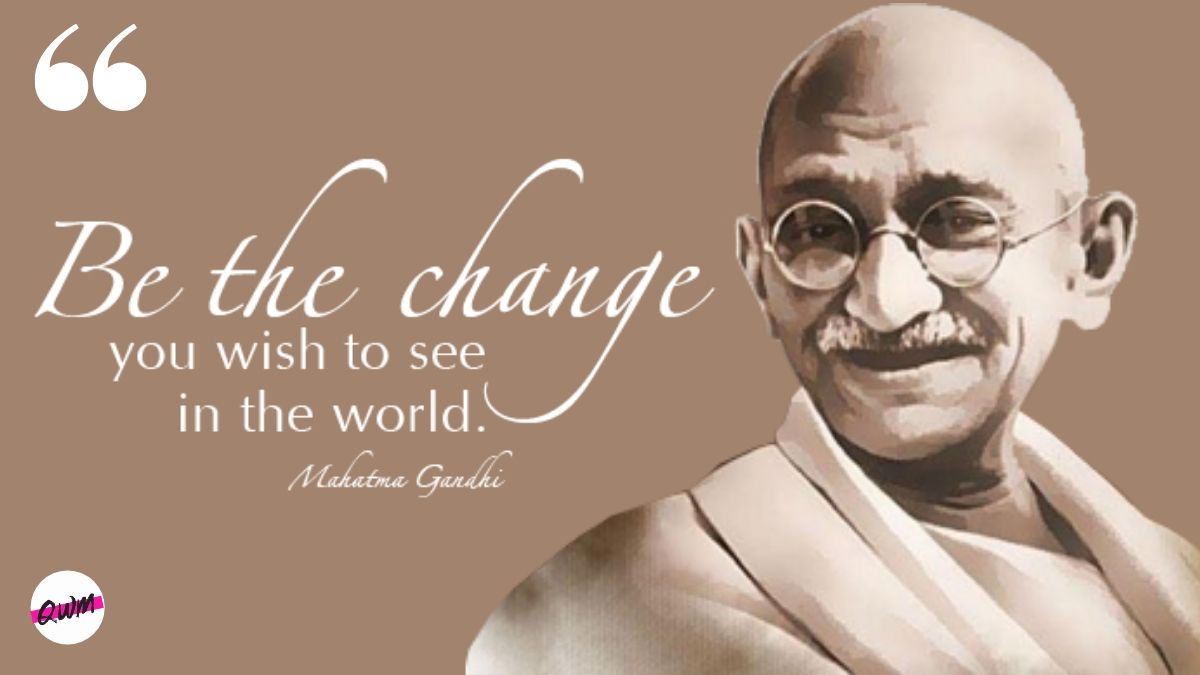 Mohandas Karamchand Gandhi popularly known as Mahatma Gandhi is a widely fabled Indian freedom fighter, a champion lawyer by profession, a political ethicist, and an anti-colonial nationalist who sowed the seed of the freedom of Indian from the British empire by his unpopularly popular non-violence strategy.

Born in a Hindu family, at a very young age, Gandhi was sent abroad for studying law and he was called by the bar council of London at the age of 22. After two unsuccessful years of law practicing in India, he moved to South Africa in 1893 to represent a merchant lawsuit in India. After staying for 21 long years in Africa and sparking the non-violent resistant campaign, he returned to India at the age of 45 to participate in the freedom frighting movement. He quickly became the flag-bearer of peasants, farmers, and landlords to oppose the heavy taxes and discrimination.

Before we further depict the life of Gandhi, check out the top inspirational 50 quotes by Mahatma Gandhi that lucidly show his greatness as an individual.

Happiness is when what you think, what you say, and what you do are in harmony. – Mahatma Gandhi

You must be the change you wish to see in the world.  – Mahatma Gandhi

An eye for eye only ends up making the whole world blind. – Mahatma Gandhi

You must not lose faith in humanity. Humanity is an ocean; if a few drops of the ocean are dirty, the ocean does not become dirty. – Mahatma Gandhi

The best way to find yourself is to lose yourself in the service of others. – Mahatma Gandhi

A man is but the product of his thoughts; what he thinks, he becomes. – Mahatma Gandhi

Strength does not come from physical capacity. It comes from an indomitable will. – Mahatma Gandhi

It’s my conviction that nothing enduring can be built on violence. – Mahatma Gandhi

I will not let anyone walk through my mind with their dirty feet. – Mahatma Gandhi

A coward is incapable of exhibiting love; it is the prerogative of the brave.- Mahatma Gandhi

Purity of personal life is the one indispensable condition for building up a sound education. -Mahatma Gandhi

There is more to life than increasing its speed. – Mahatma Gandhi

A teacher who establishes rapport with the taught, becomes one with them, learns more from them than he teaches them. He who learns nothing from his disciples is, in my opinion, worthless. Whenever I talk with someone I learn from him. I take from him more than I give him. – Mahatma Gandhi

An education which does not teach us to discriminate between good and bad, to assimilate the one and eschew the other, is a misnomer. -Mahatma Gandhi

By spiritual training I mean education of the heart. -Mahatma Gandhi

Is not education the art of drawing out full manhood of the children under training? -Mahatma Gandhi

Persistent questioning and healthy inquisitiveness are the first requisite for acquiring learning of any kind.- Mahatma Gandhi

Experience gained in two schools under my control has taught me that punishment does not purify, if anything, it hardens children.- Mahatma Gandhi

The aim of university education should be to turn out true servants of the people who will live and die for the country’s freedom. – Mahatma Gandhi

Our greatest ability as humans is not to change the world; but to change ourselves. – Mahatma Gandhi

Speak only if it improves upon the silence. – Mahatma Gandhi

If we want to reach real peace in this world, we should start educating children – Mahatma Gandhi

Service which is rendered without joy helps neither the servant nor the served. – Mahatma Gandhi

It’s easy to stand with the crowd. It takes courage to stand alone. – Mahatma Gandhi

The greatness of a nation and its moral progress can be judged by the way its animals are treated. – Mahatma Gandhi

Whenever you are confronted with an opponent. Conquer him with love. – Mahatma Gandhi

I cannot conceive of a greater loss than the loss of one’s self-respect. – Mahatma Gandhi

A man is but a product of his thoughts. What he thinks he becomes. – Mahatma Gandhi

The enemy is fear. We think it is hate; but, it is fear. – Mahatma Gandhi

A coward is incapable of exhibiting love; it is the prerogative of the brave. – Mahatma Gandhi

To lose patience is to lose the battle.- Mahatma Gandhi

Even if the paradise of material satisfactions, which they envisage as their final goal, were realize on earth, it would not bring mankind either contentment or peace. – Mahatma Gandhi

It is unwise to be too sure of one’s own wisdom. It is healthy to be reminded that the strongest might weaken and the wisest might err. – Mahatma Gandhi

To give pleasure to a single heart by a single act is better than a thousand heads bowing in prayer. – Mahatma Gandhi

There is nothing that wastes the body like worry, and one who has any faith in God should be ashamed to worry about anything whatsoever. – Mahatma Gandhi

Man should forget his anger before he lies down to sleep. – Mahatma Gandhi

Early Life of Mahatma Gandhi and His Family Background

He was born on 2nd October 1860 to a Hindu-Baniya family in Porbandar. His father, Karamchand Uttamchand Gandhi was the chief minister (Diwan) of Porbandar state. Mohandas Gandhi was the child of his father’s fourth wife named Putlibai. The first two wives of Gandhi’s father died at a very young age. His marriage with the third wife was childless so he took the permission of the third wife to marry to Putlibai.

The religious background of Gandhi’s family was predominantly Hindu. His father belongs to the Modh Baniya caste in Vaishya varna. His father was an ardent follower of Lord Krishna and the religious follower of Hindu rituals. In 1874, Gandhi’s father moved to Rajkot and became the Diwan of the state. At the mere age of 13, Mohandas Gandhi was married to 14 years old Kastrubai Makhanji Kapadia. His wedding was a joint event where his brother and cousin were also married. The first children of Gandhi and Kasturbai died early. They later had four more children: Harilal, Manilal, Ramdas, and Devdas.

In the year 1893, Gandhi moved to Africa where he garnered all his law education, political views, and ethics. Right after moving to South Africa, he faced brutal discrimination because of his skin color. He was not given permission to sit with white people( The Britishers and Europeans) and when refused, beaten mercilessly and thrown into a gutter. This utter humiliation he got propelled him to question his existence there.

After volunteering a few small protests and movements in Africa, Gandhi shifted his entire focus on protecting the rights of Indians in Africa. He formed a party there named Natal Indian Congress to fight against racism and preposterous discrimination in Africa. In 1906, when the British commenced a war against the Zulu Kingdom, Gandhi urged Indians to support and volunteer Zulus in the war. They were doing the work of stretch bearers to save injured Zulus. Many of Indian volunteers were shot dead by the British during the war.

After the request of Gopal Krishna Gokhale, Gandhi returned to Indian in 1915 with the fabled reputation of an international nationalist and theorist. He quickly joined Indian national congress and led many successful movements like Champaran Satyagrah, Kheda Satyagrah, Khilafat movement, non-cooperation movement, Salt Satyagrah, and achieved hard-fought Independence in the year 1947.