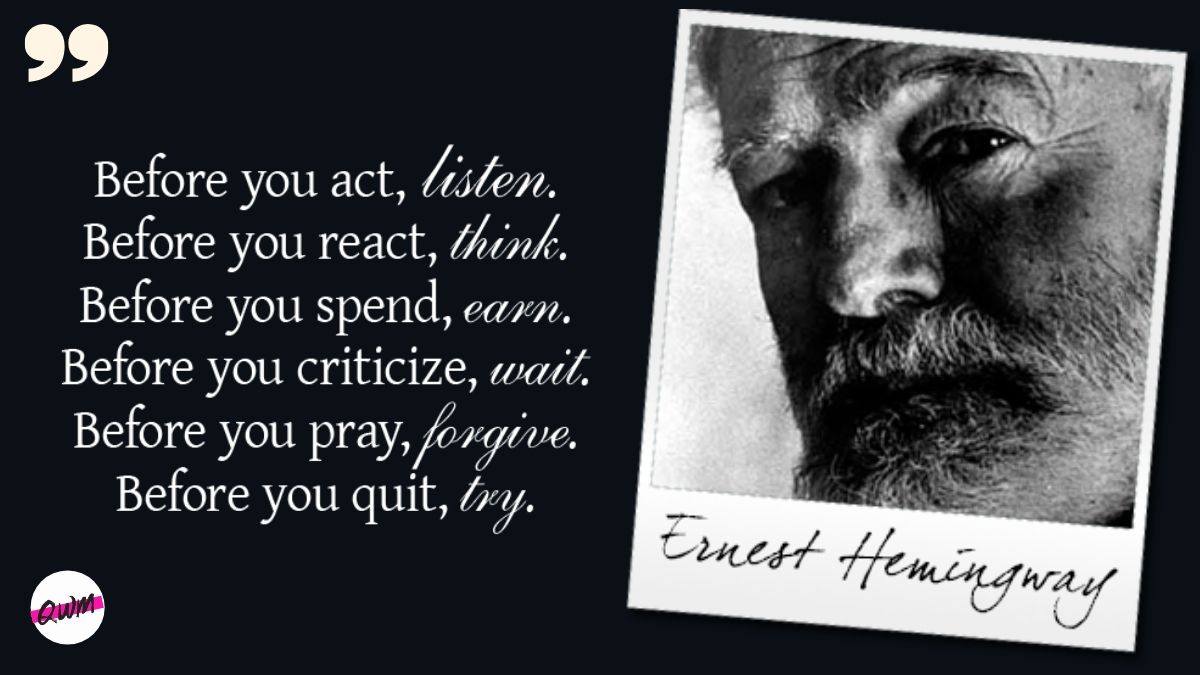 Why does art comes through pain? Why a best art work always done in pain? Why is it so? Why is it so? In this post we are going to cover for you top 50 Ernest Hemingway quotes, which you would really love to read. They could change your perspective on life. Perhaps writers write those things that they could not do or wanted to do, or they write those things that they have lived completely. It is mere a thought, not a judgement!

Who was Ernest Hemingway? And his top 50 quotes.

We always have to say this but Ernest Hemingway was one of the best American writers who hugely contributed to American literature. His complete name was Ernest Miller Hemingway. He was born on July 21, 1899 in Oak Park, Illinois.

He was not only a writer. It was his later life’s role. He had played many roles in his life professionally. He was a journalist foremost, sportsman, short story writer and novelist; in the starting of his life he drove ambulance in World War First.

Hemingway did his schooling from Oak Park and River Forest High school. During this period, he was involved in water polo, football, boxing, track and field and in others sports. During his high school time he edited school newspaper and yearbook Trapeze and Tabula.

His mantra for writing, which was a foundation for it, he took from Star’s style guide. The mantra was- “use short sentences. Use short first paragraphs. Use vigorous English. Be positive, not negative.” Ernest Hemingway’s writing style is known as the ‘iceberg theory’.

His notable works are- In Our Time, The Old Man and The Sea, A Farewell to Arms, To Have and Have not, For Whom The Bell Tolls and The Sun Also Rises. He was awarded Pulitzer Prize for fiction in 1953 and Nobel Prize in literature in 1954. Hemingway died on 2nd July 1961. He shot himself with his favorite shotgun.

If you want to read more about Ernest Hemingway’s interesting life, you can concern a good book. Here for you, Ernest Hemingway top 50 quotes below, which you love to bookmark or love to read again and again reminiscing him.

The most painful thing is losing yourself in the process of loving someone too much, and forgetting that you are special too.

I love sleep. My life has the tendency to fall apart when I’m awake, you know?

If two people love each other there can be no happy end to it.

Never go on trips with anyone you do not love.

“The best way to find out if you can trust somebody is to trust them.”

“I drink to make other people more interesting.”

“Courage is grace under pressure.”

“It is good to have an end to journey toward; but it is the journey that matters, in the end.”

“There’s no one thing that’s true. It’s all true.”

“Every man’s life ends the same way. It is only the details of how he lived and how he died that distinguish one man from another.”

“The world breaks every one and afterward many are strong at the broken places.”

“My aim is to put down on paper what I see and what I feel in the best and simplest way.”

“The first and final thing you have to do in this world is to last it and not be smashed by it.”

“In order to write about life first you must live it.”

“you can’t get away from yourself by moving from one place to another.”

“Always do sober what you said you’d do drunk. That will teach you to keep your mouth shut.”

“Wine is the most civilized thing in the world”

“The only thing that could spoil a day was people. People were always the limiters of happiness except for the very few that were as good as spring itself.”

“Happiness in intelligent people is the rarest thing I know.”

“The most essential gift for a good writer is a built-in, shockproof, shit detector.”

“It’s none of their business that you have to learn how to write. Let them think you were born that way.”

“There is no rule on how to write. Sometimes it comes easily and perfectly; sometimes it’s like drilling rock and then blasting it out with charges.”

“There is nothing to writing. All you do is sit down at a typewriter and bleed.”

“I write one page of masterpiece to ninety-one pages of shit. I try to put the shit in the wastebasket.”

“If a writer stops observing he is finished. Experience is communicated by small details intimately observed.”

“My aim is to put down on paper what I see and what I feel in the best and simplest way.”

“Once writing has become your major vice and greatest pleasure only death can stop it.”

“When writing a novel a writer should create living people; people not characters. A character is a caricature.”

“A man’s got to take a lot of punishment to write a really funny book.”

“The first draft of anything is shit.”

“It is all very well for you to write simply and the simpler the better. But do not start to think so damned simply. Know how complicated it is and then state it simply.”

“I always try to write on the principle of the iceberg. There is seven-eighths of it underwater for every part that shows.”

“Remember to get the weather in your damn book–weather is very important.”

“There is no friend as loyal as a book.”

Never think that war, no matter how necessary, nor how justified, is not a crime.

Once we have a war there is only one thing to do. It must be won. For defeat brings worse things than any that can ever happen in war.

For a war to be just three conditions are necessary – public authority, just cause, right motive.

Wars are caused by undefended wealth.

In modern war… you will die like a dog for no good reason.

To make war all you need is intelligence. But to win you need talent and material.

War is not won by victory.

No weapon has ever settled a moral problem. It can impose a solution but it cannot guarantee it to be a just one.

You never kill any one that you want to kill in a war, he said to himself.